Designing the Cell-based Meat Facility of the Future

At CAS we strive to take the intricate nature of cellular agriculture and make it feel approachable and within reach. This, and our belief that design & video production are critical tools to educate potential future consumers, led us to starting Project CMF.

Project CMF, short for Cell-based Meat Facility, gives a glimpse into a future where meat is made by farming animal cells instead of animals. It represents the first vision for meat production at scale through the process of cellular agriculture. Its realistic renders, exist both from a visual standpoint, but more importantly, a technical one, since the design is backed by dozens of pages of calculations and input from our amazing partner scientists at CAS.

For years we’ve seen the type of imagery that’s used to represent our field: it’s cold, clinical, and most importantly, inaccurate. We created CMF to accurately reflect where our field is heading and to share representational visuals that tell that story without any language for our international audience. By creating an ambitious, yet reasonable depiction of a cell-based meat production facility in the year 2040, the designs on this webpage give the public an accurate vision for what a “lab-grown” meat facility will actually look like. 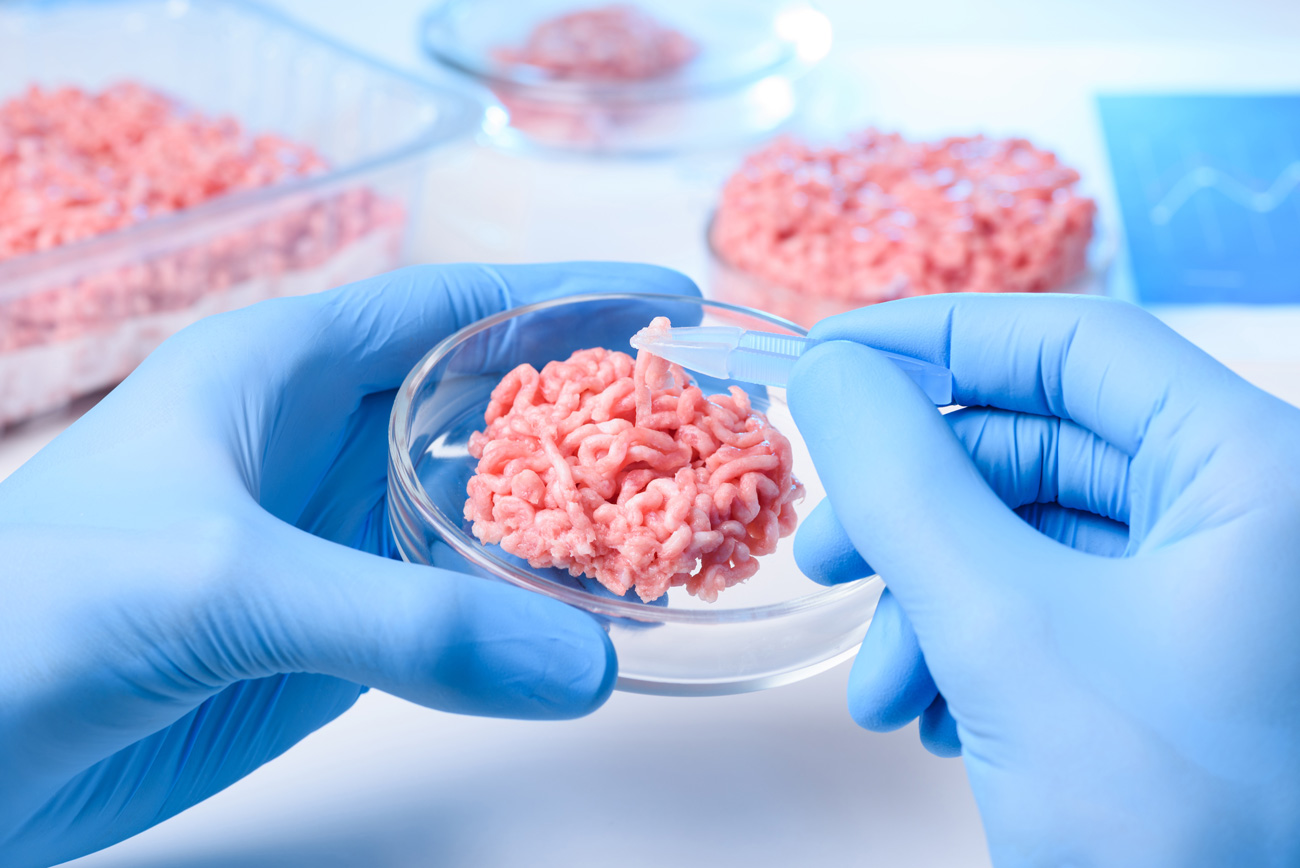 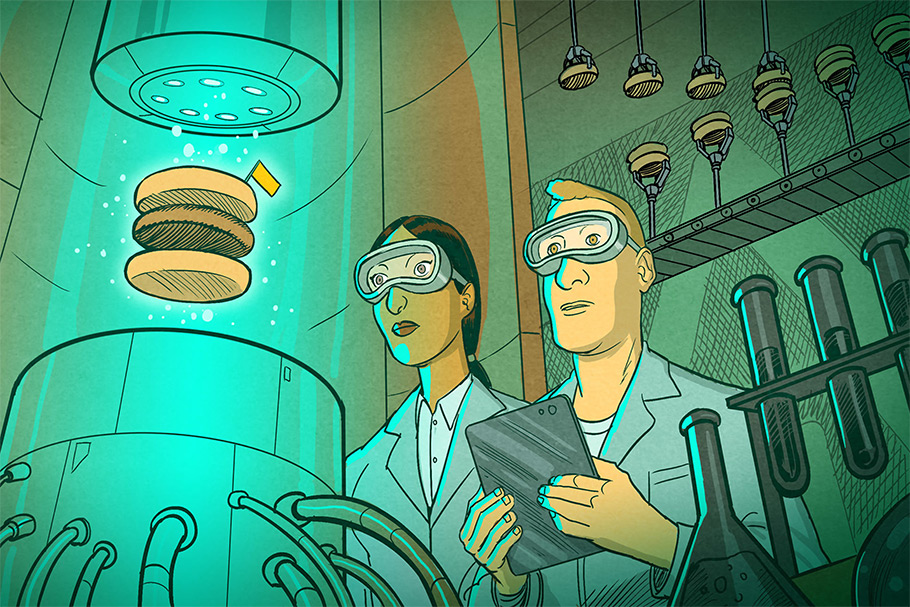 While they are often hidden out from cities and towns, slaughterhouses play a major role in global society. Their existence is a critical piece to the puzzle for food producers supplying meat to the world. Project CMF’s major challenge was to innovate an evolution to such a building, transitioning the processes within its walls from that of animal agriculture to cellular agriculture; this would prove to be a tall task. We were additionally faced with the challenge of ensuring public perception of cellular agriculture improved, providing a more accurate alternative to the petri dish and Sci-Fi imagery shown above. So alongside leading scientific experts in cellular agriculture, we designed the world’s first realistic depiction of a Cell-based Meat Facility which now offers that visual alternative to what’s so commonly used to represent our concept. 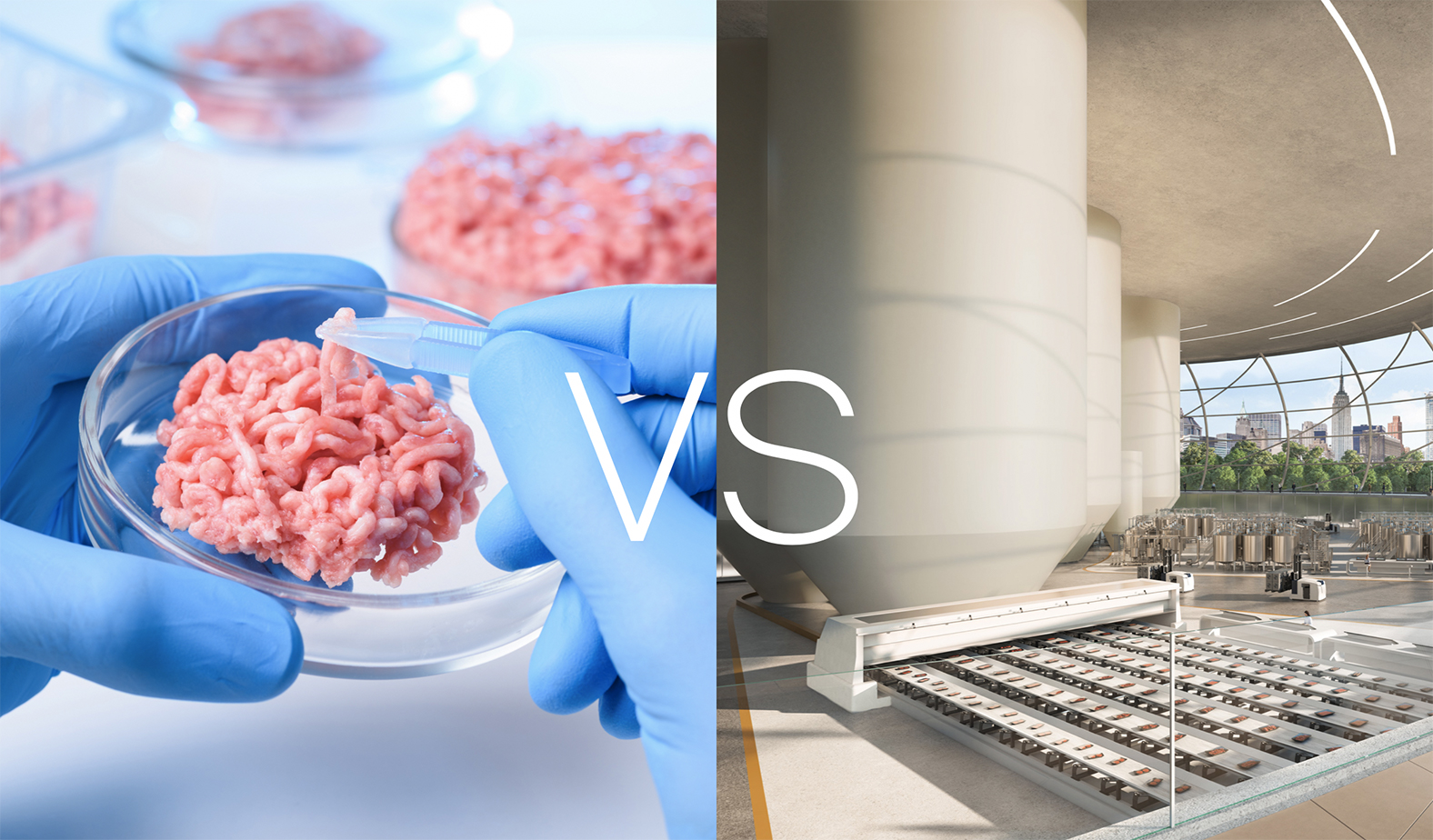 Our Founder, Kristopher Gasteratos, had been developing a vision for many years on what a cellular agriculture-driven meat production facility would look like. He felt the design had to strike a crucial balance between the old and the new. It couldn’t feel too futuristic, and hence, out of reach, but also had to confidently stand within its innovativeness. After all, a revolutionary architecture effort like CMF was indeed the first of its kind. The design needed to live up to the iconic status it could warrant within human civilization in just a couple decades; similar to what people come to expect when thinking of other common iconic structures: a grocery store, fire station, post-office, or basketball court. They all convey a relatively consistent vision when you consider their architectural structures, inside and out.

Any serious work on what would ultimately be termed Project CMF was delayed for a number of years. CAS didn’t possess the proper funding that was necessary to do such a project justice, nor the right collaborator who understood the breadth of the creative mission. Fast forward to late 2018 and we were underway creating the first textbook on cell-based meat. We quickly realized that visuals, which we felt were going to be so critical to the book's success, were a missing component to the textbook. This neglected area of our textbook coupled with that previous vision for the architectural concept, as well as the connections we now had with scientific leaders in the field of cellular agriculture who could provide the right counsel, led us to the beginning of Project CMF.

Towards the end of 2018, we decided we were going to take this endeavor seriously and sought to find a collaborating visual designer who would come on board for the massive innovation effort that CMF required. Project CMF not only had to reimagine what meat production would look like, but because it’s set in the year 2040, we needed to integrate other futuristic artistic elements related to technologies that are likely to play a larger role in society. In the early phases, we spent time determining how to mesh the 20-years of projected innovation of cellular agriculture with other advanced technology companies including Boston Dynamics, Tesla, and Hyperloop. 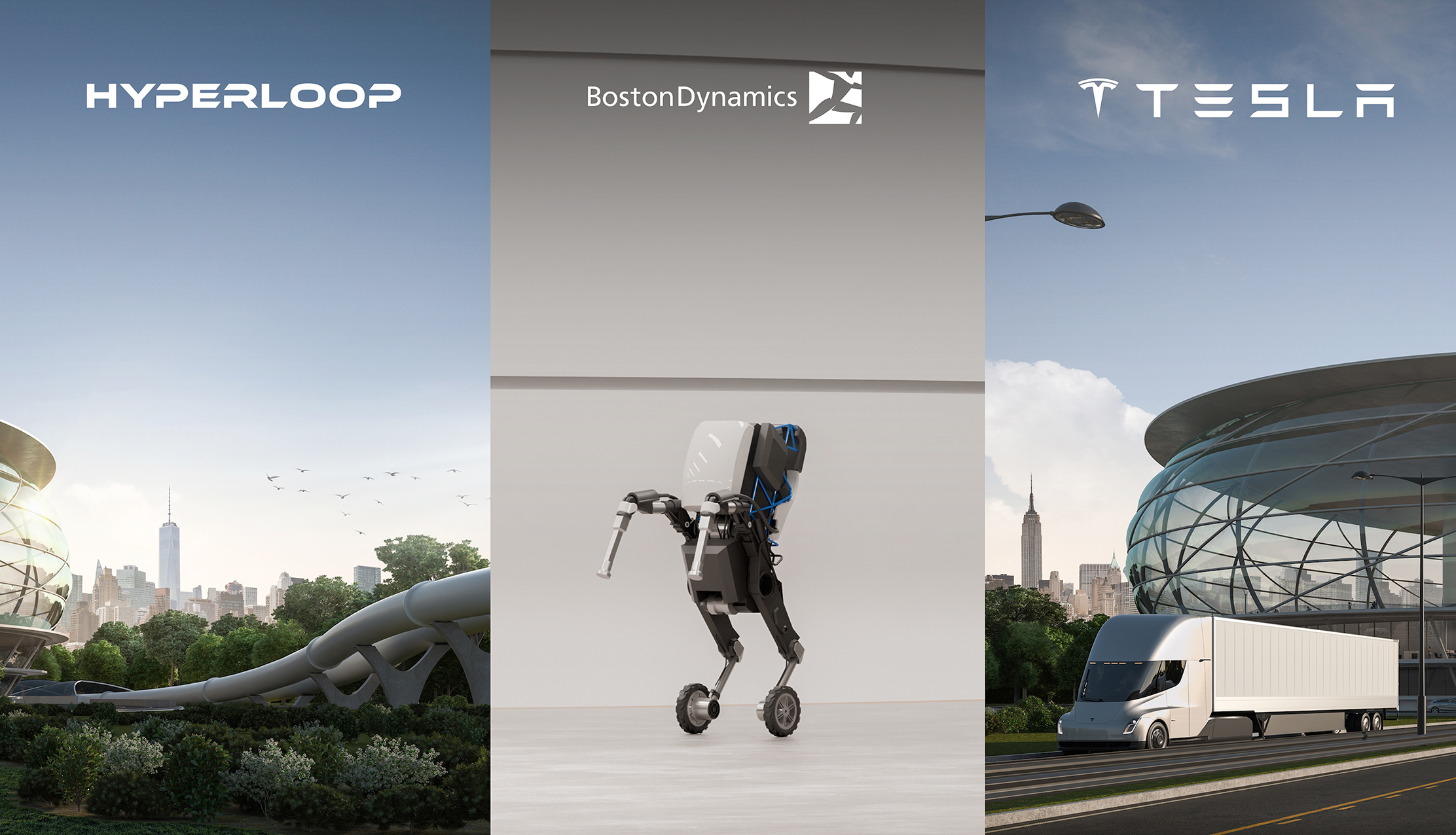 With all the future mindset CMF called for, it was tough finding someone up for the challenge; most visual designers we spoke with were more comfortable with the traditional living room or kitchen renders, but we eventually met Mihai Iacubovschi, a 3D artist who was interested in working on the project. The next step was working with our CAS Industry Partners to gather their views on the future of CellAg, discussing existing research that would inform an accurate design, and ultimately incorporating the diverse feedback we received from these experts to create a vision that reflected our entire field, democratically.

Over the course of a year, the majority of time spent on Project CMF was strategic planning. This was because scaling up cellular agriculture-produced meat is a top R&D focus for virtually every startup in the world working in this space, so unified agreement was difficult to come by. It seemed simple that the design had to illustrate a structure, but this structure was heavily influenced by function, similar to anatomy and physiology, and they influence each other heavily. Over many iterations, we incorporated the dozens of pages of data and calculations we received from our industry partners and CMF’s design successfully started to pair the original vision of our Founder with the influx of diverse opinions and viewpoints from the top scientific experts in our field. 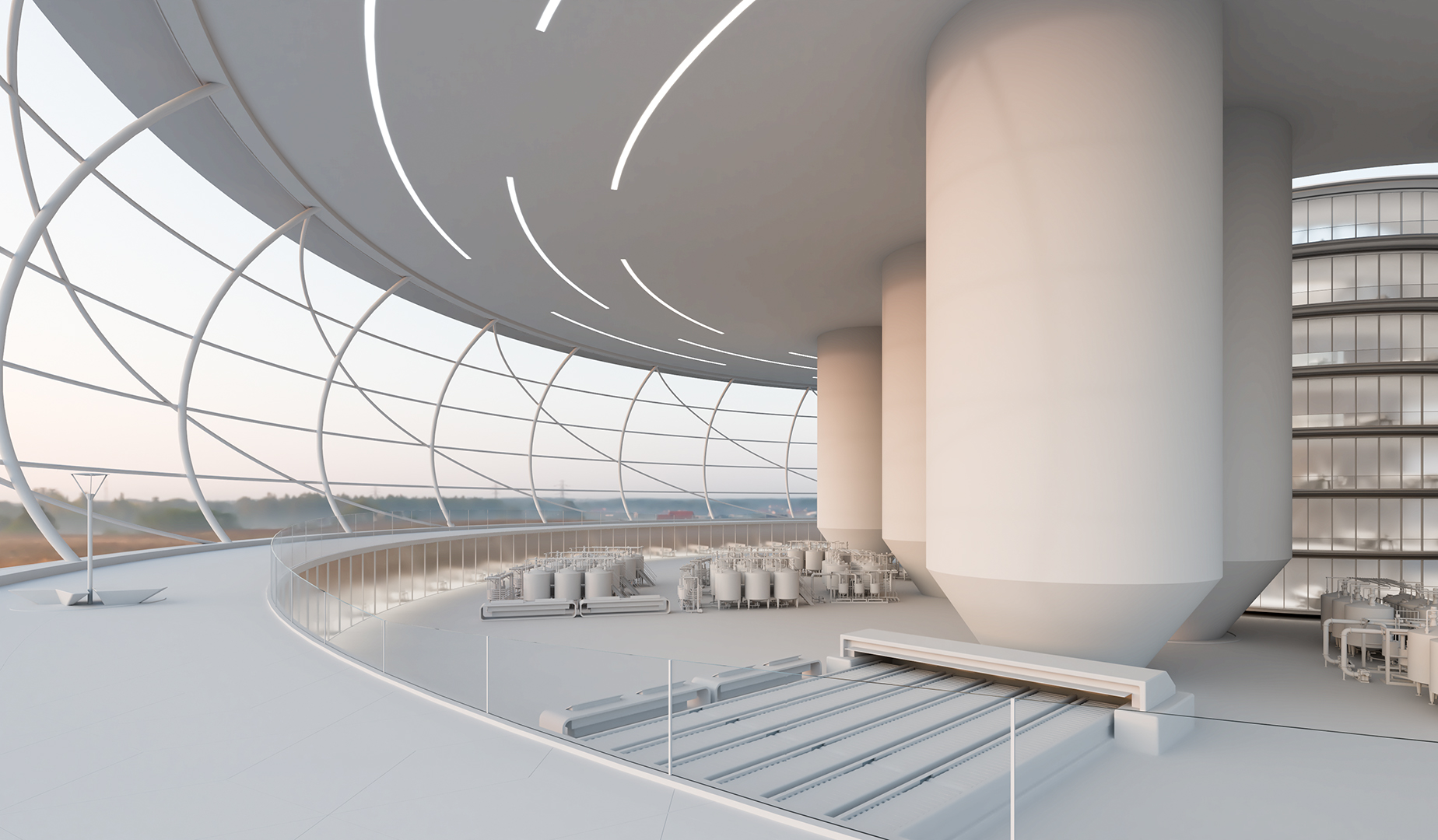 Meanwhile, we had received an invitation to be the first to speak with Googlers on the topic of CellAg/cell-based meat. CAS has been asked to deliver the "Introduction to lab-grown meat" presentation quite often over the last decade, so with our work on CMF developing in tandem we thought this was a great chance to unveil the initial phases at Google through a pre-unveil of our first designs. Google was excited to feature a Project CMF reveal at our Talk@Google, and the rest is history!

The part of this project we feel most proud to have implemented was Project CMF’s representation of the state of our field and what the cutting edge is building up to soon; it illustrates a vision for openness, transparency, and innovation for the future of meat. We were honored to have led an effort where companies who are usually staunch competitors collaborated on the project to benefit public awareness on cellular agriculture. We’re grateful to the many cell-based meat companies around the world who came together to design this "slaughterhouse of the future" and without their input, Project CMF would not be possible.

CMF is featured prominently in CAS materials, including our website, social media, and the CAStore.

Project CMF, a Featured Design from the CAStore

From Cell to Burger

The following process is best illustrated through the visual aid of Project CMF. We will note the stages in subsequent paragraphs below and reference the names of the renders to gear your attention to the relevant designs that that stage of the process is related to.

STEP 1 - Raw materials for the cells, in the form of powdered media, are delivered via a hyperloop transportation system. To become a media solution that can be consumed by cells, this powdered media is mixed with treated (sterile) water on the “Media Production” floor and then pumped up to the “Main Interior'', into the Cell Cultivators (tanks where cells and media mix). This process differs slightly for each cell/meat type, as different species’ cell lines require different prepared media.

STEP 2 - Simultaneously, an immortalized cell-line progresses through a seed train on the “Main Interior”, eventually making its way to the largest capacity, ~3 million liter cell cultivators. The cells are mixed with the media solution described in Step #1 above, as well as feeder-cultured products, throughout their duration in the seed train.

STEP 3 - As they continuously consume nutrients from the media solution, the cells in the cell cultivators from the “Main Interior” eventually duplicate in quantity to a threshold high enough to move on to the Meat Cultivators (where blank cells that are not yet specified become differentiated). To proceed, they exit through the bottom of the cell cultivators from the “Main Interior” to the Meat Cultivators on the “Food Processing” floor. This floor, unlike the one above, is physically, but not visually, closed off to visitors as it is a highly-specialized area free of contaminants which constantly monitors for pathogens to ensure maximum food safety.

STEP 4 - Once in the meat cultivators on the “Food Processing” floor, the cells, still in a solution with the media and now waste products as well, are filtered through a structure that scaffolds them, allowing the cells to take shape towards their final meat structure. While this is taking place, the used-media solution (waste products) return back to the “Media Production” area to be recycled and the waste discarded.

STEP 5 - Once they go through the scaffolding system of the meat cultivators, the cells have successfully gone from a blank cell to a more specified meat cell type, and are finally ready to become their respective meat product. They then leave the meat cultivators, and food processing commences, taking certain types of meat cells like ground beef and forming it into particular types, like hamburgers or meatballs; this all takes place on the “Food Processing” floor, culminating with packaging, before going back up the conveyor belt to the “Main Interior”.

STEP 6 - Lastly, the packaged meat products travel on the conveyor belt, going from the “Main Interior” to the “Media Production” floor, now prepared for final delivery where autonomous Tesla trucks and Hyperloops await.

The Future of Meat Production

The following designs exhibit the idea of a slaughterhouse, conceptually reimagined. Project CMF was originally unveiled at Google, providing a glimpse into a future where meat is made by farming animal cells instead of animals. This visualization of a "Slaughterhouse 2.0" was a collaboration between dozens of our CAS Industry Partners who helped us create a realistic depiction for a meat production facility in 20 years. We are proud to present to you, Project CMF, set in New York City, 2040… 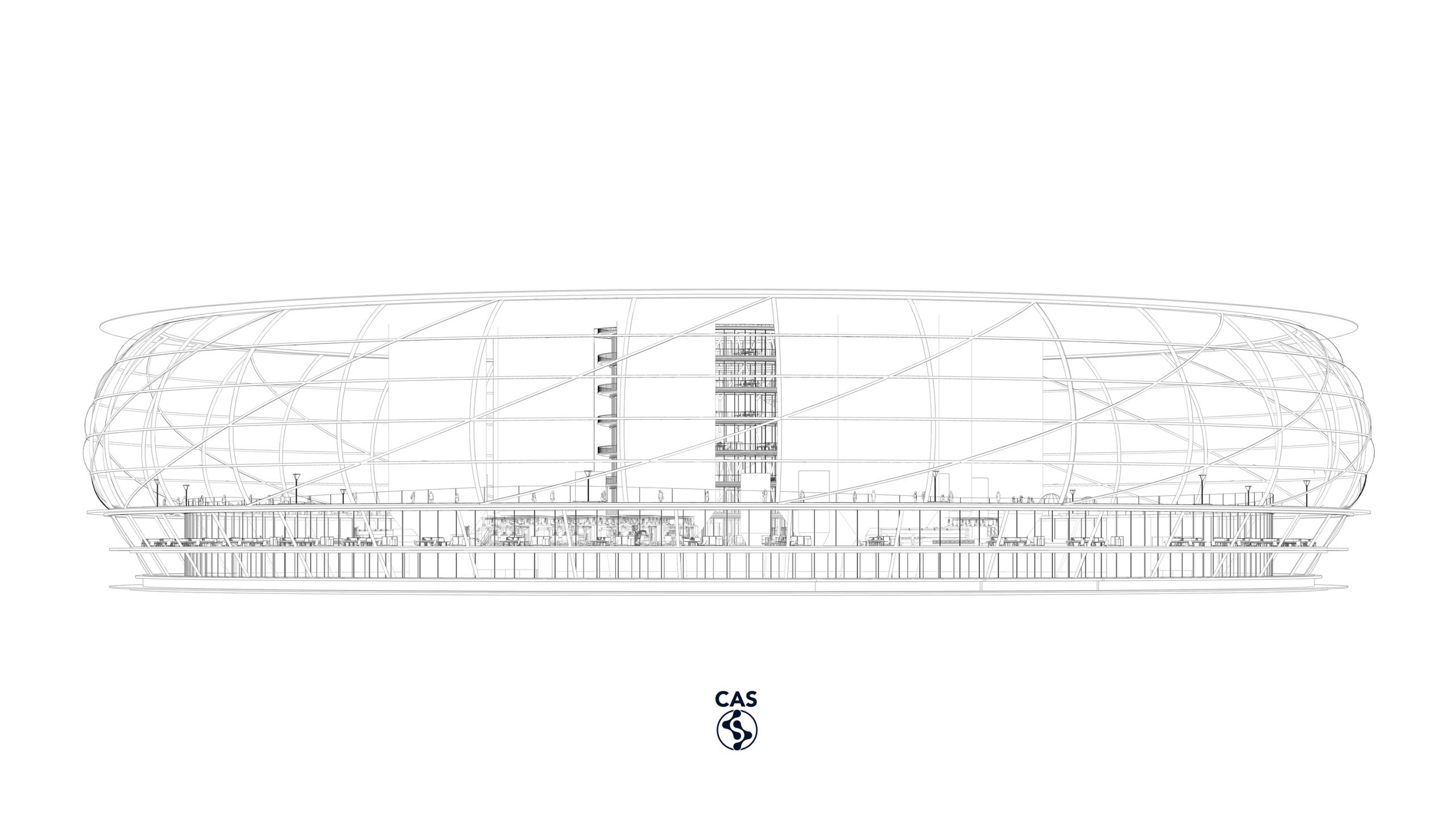 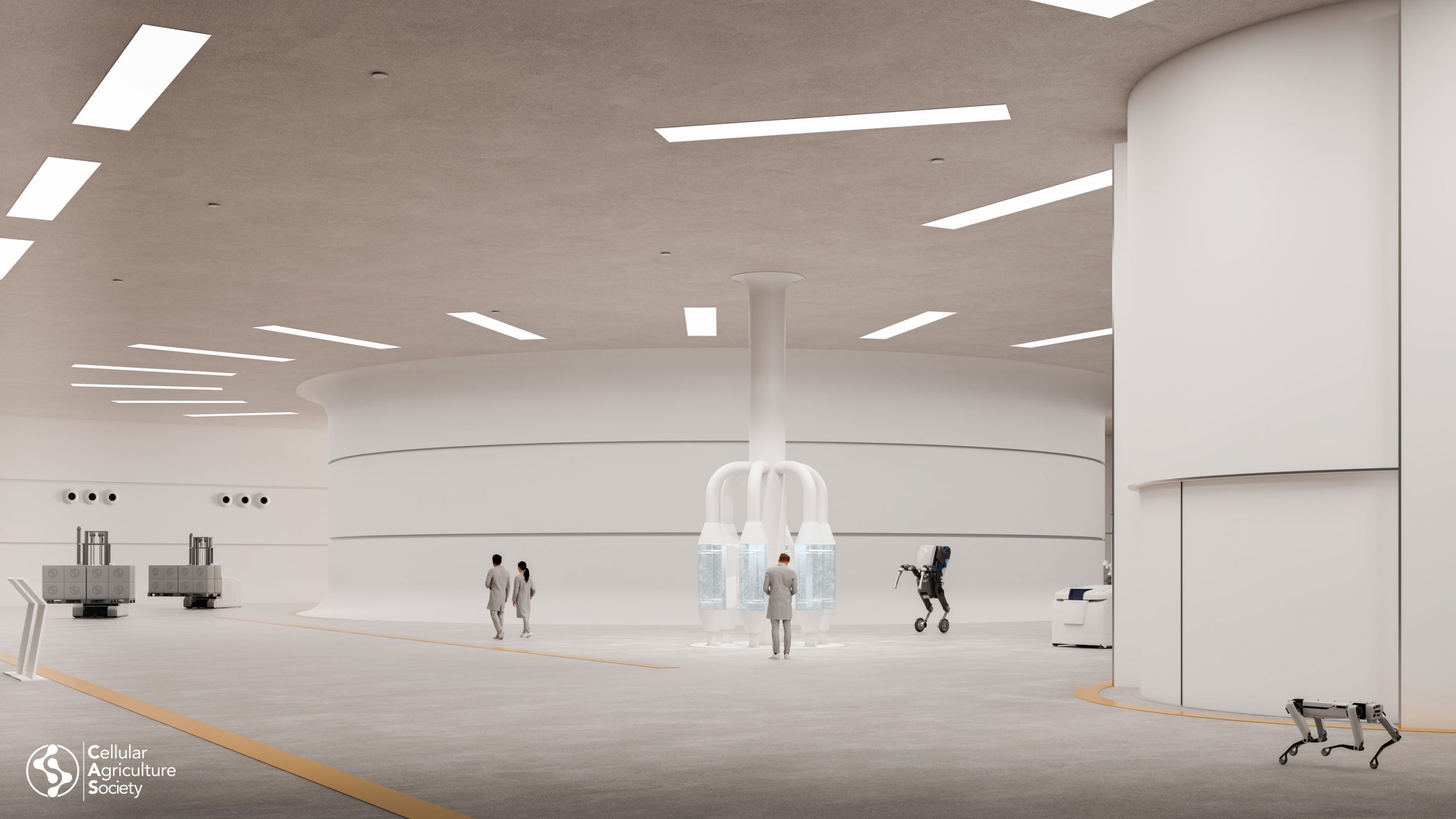 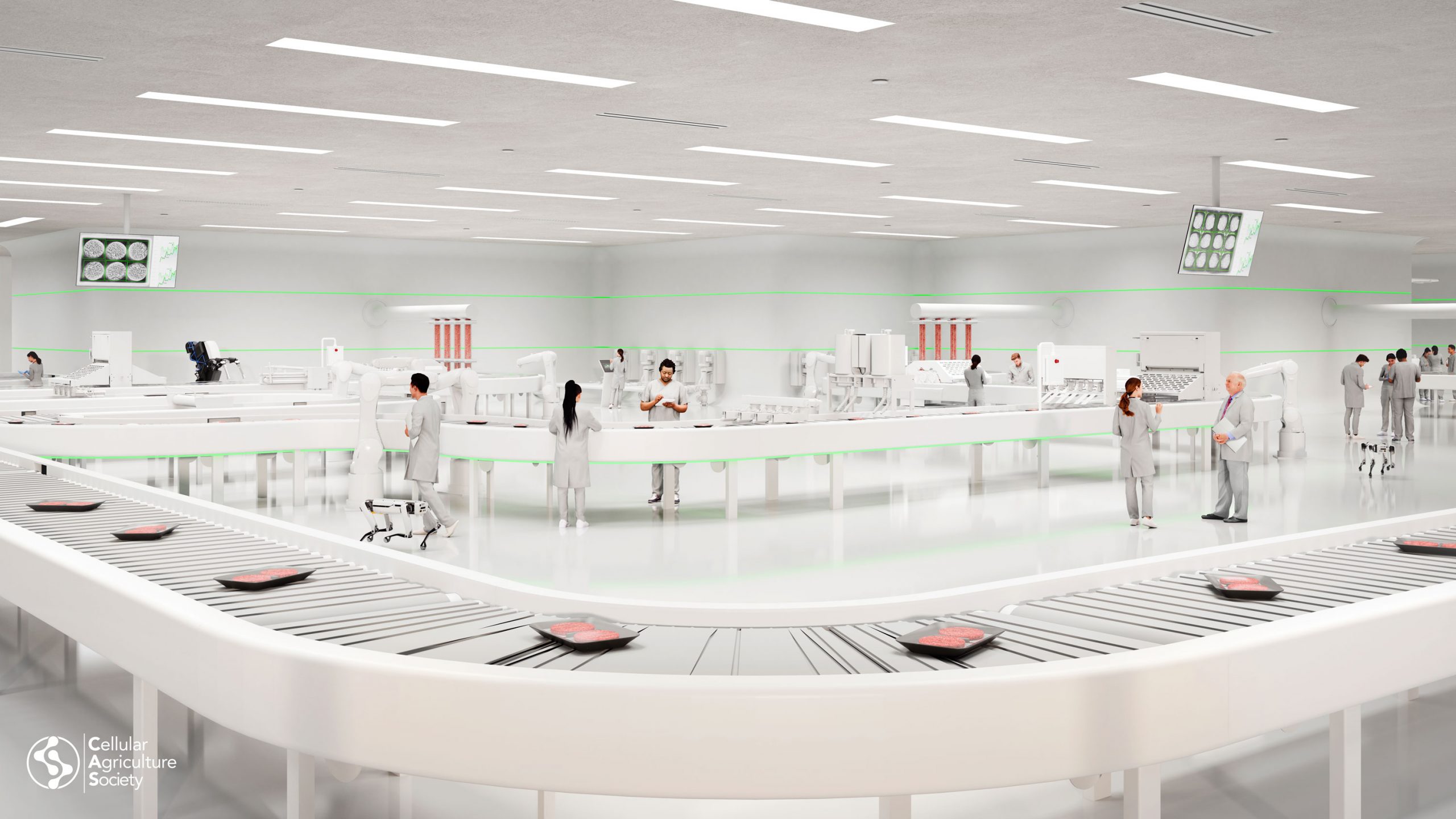 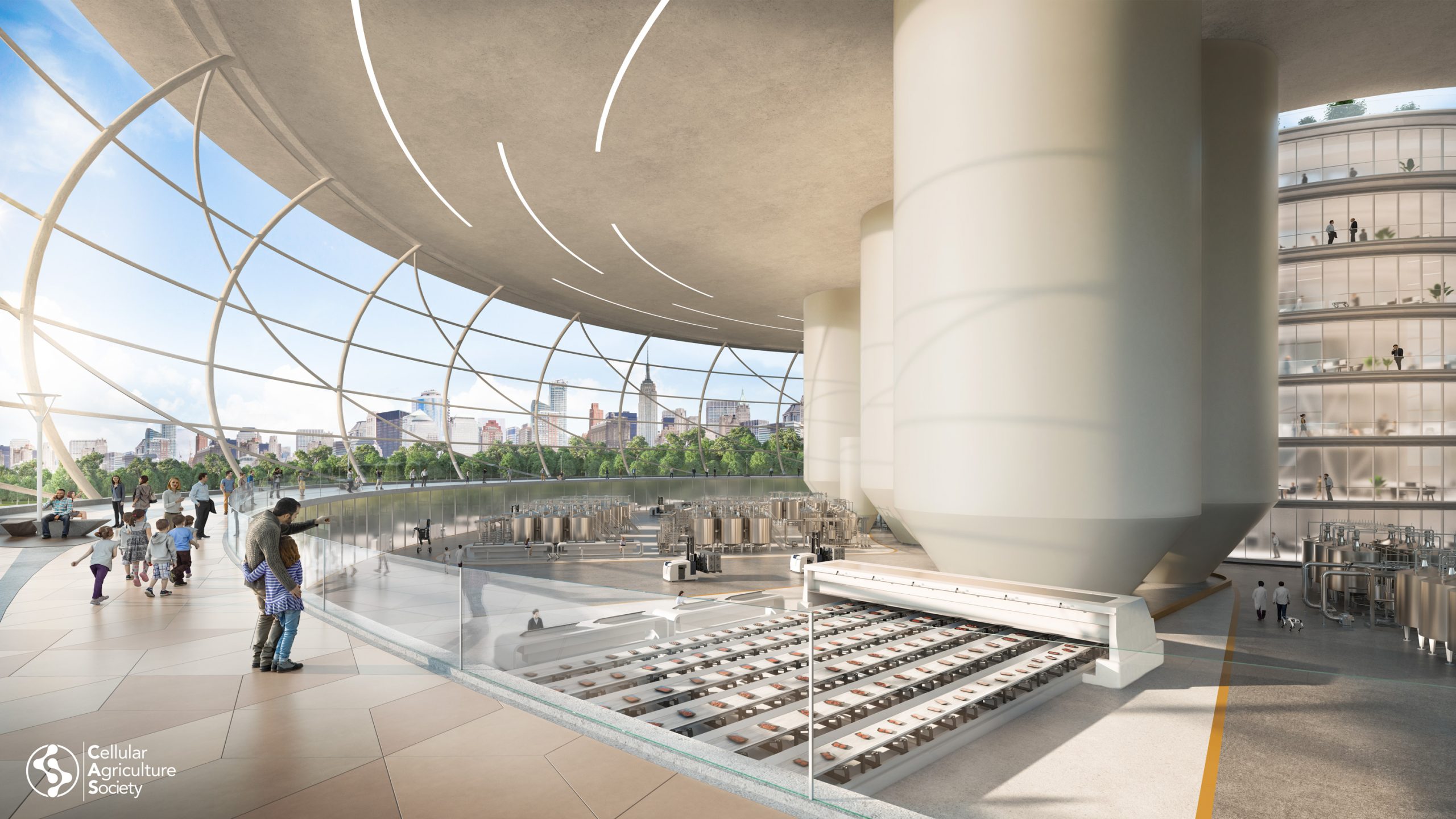 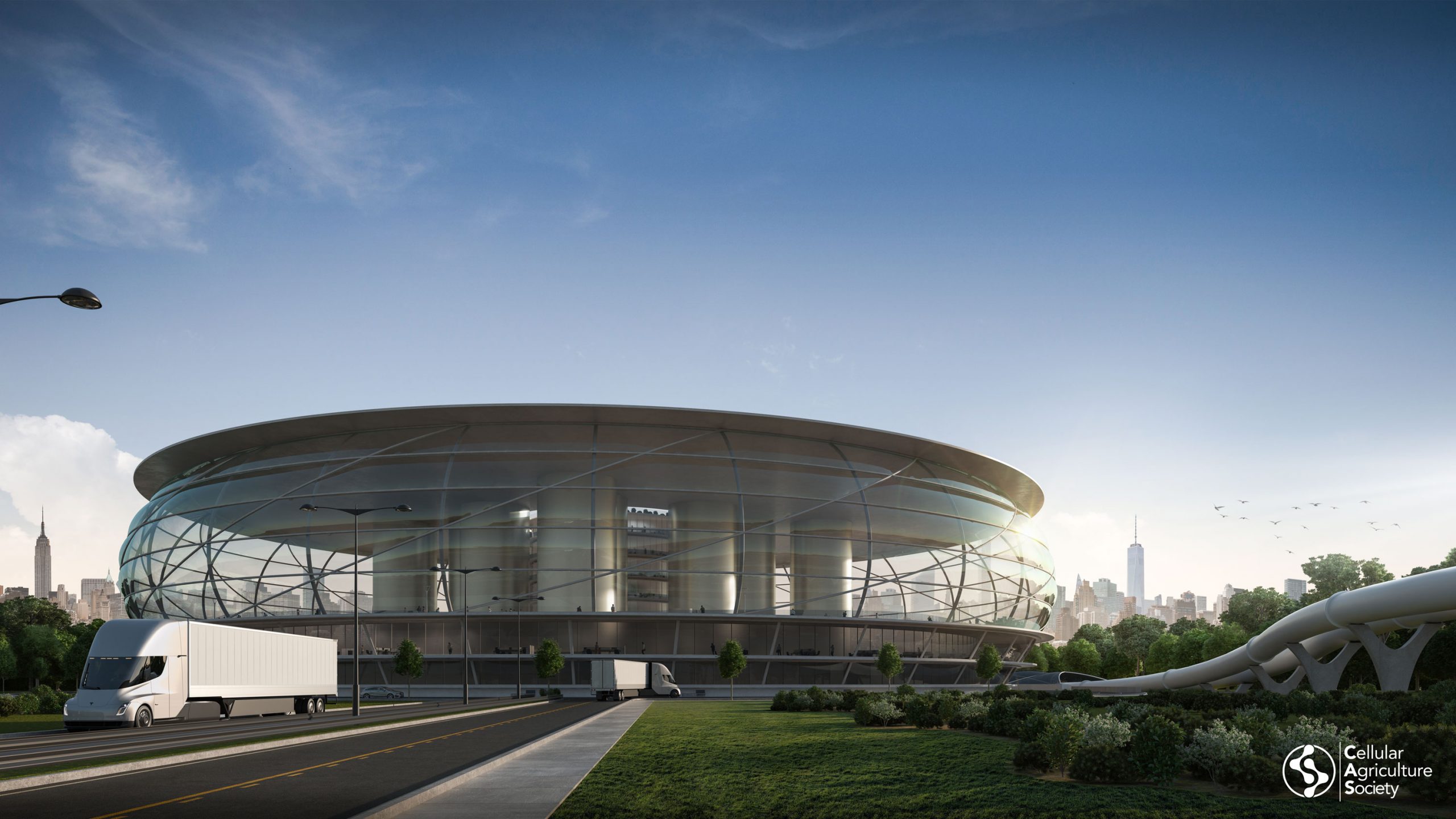 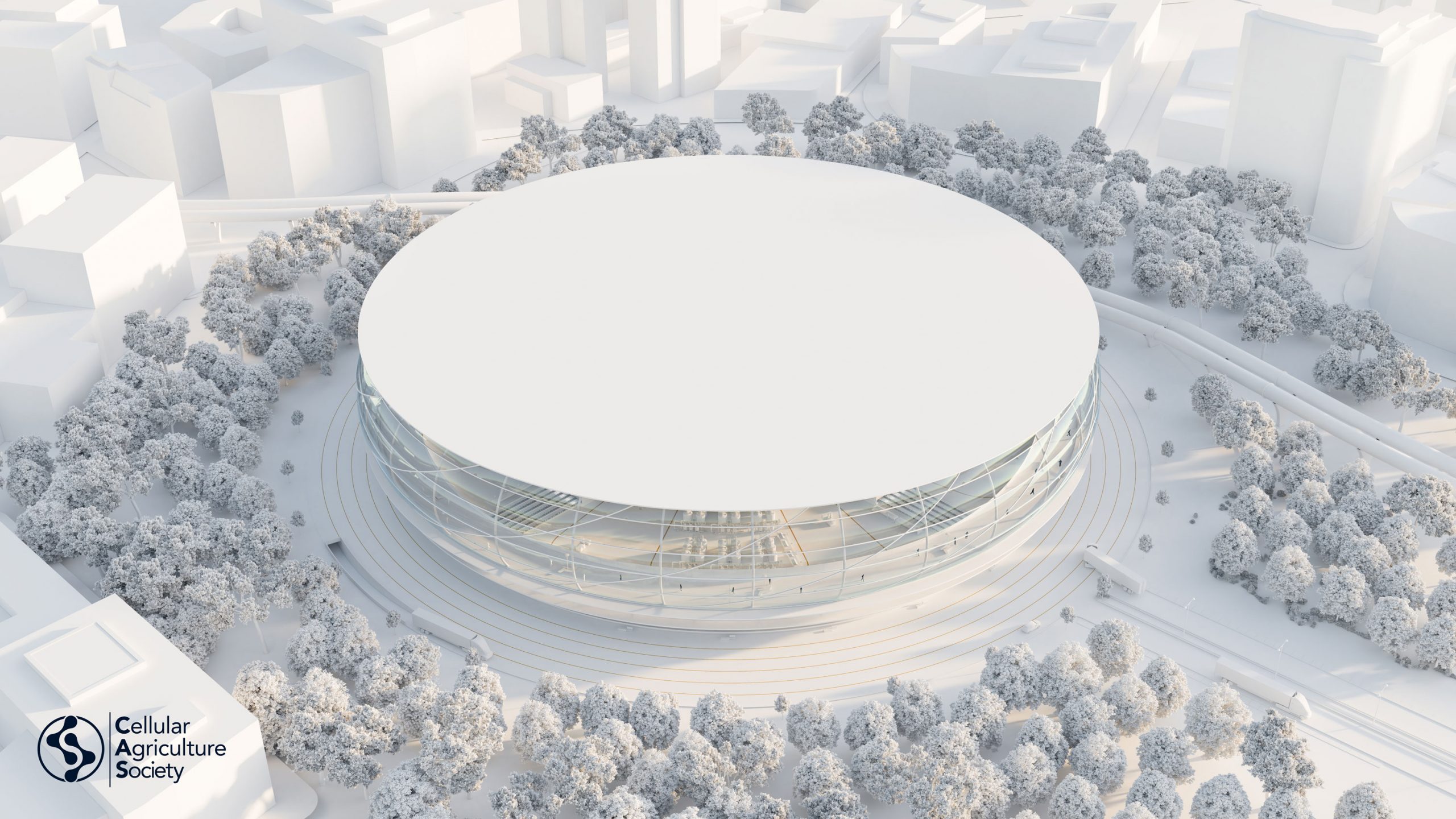 Please let us know if you would like to use Project CMF within a project of yours; we are keen to keep track of its utility to our growing global community. Feel free to email us a brief message at info@cellag.org on how you plan to use it, and please respect our copyright on Project CMF by properly attributing CAS.