For the People. For the Animals. For the World.

We so often hear people describe the concept of cellular agriculture with dramatic adjectives such as “revolutionary”, “transformative”, and “world-changing”, but at CAS we noticed a disconnect between such intense, emotional language and the visual identity of our young field. A photograph of meat created via cellular agriculture does indeed portray the state of the CellAg field, but we asked ourselves, how much does this type of visual tap into unifying states of human emotion? How much does it convey what we see as a deeper representation of CellAg, like our mantra within the CAS Slogan? We found the answer to be discouraging and a disservice to CellAg; this portrayal of cellular agriculture was leading to a vast miscommunication with the public who, for the most part, are just learning about cellular agriculture for the first time.

It was this disconnect between the commonly attributed emotional language of CellAg and the corresponding non-emotional imagery that motivated us to transform the narrative and urge our industry partners to tackle the challenge similarly. This was the first element that led to creating CAS Vision, an artistic representation of our mantra at CAS: For the People. For the Animals. For the World. It also provided the spark for CAS to fully dive into the creative world of cellular agriculture for years to come.

The second element that inspired our action was discovered in considering how a leader in cellular agriculture education, a role we found ourselves increasingly occupying over the years, should communicate such a novel concept. More specifically, how CAS should communicate CellAg through our organization's most frequently used information channel, the conduit where the highest quantity of people will discover both us and the greater field of cellular agriculture for the first time, the internet.

We see our website as not only a home for CAS, but also the home for a vision: one for the concept of cellular agriculture which holds so much promise for the people, the animals, and the world. And over time, as we came into the position of serving as the internet’s global hub for cellular agriculture, we felt a strong responsibility to make the experience any visitor has with our website an unforgettable one. This, of course, starts with the introduction to CellAg.org.

When it came to that initial interfacing between CAS and internet visitors, the topic of imagery instantly arises. While featuring someone holding a petri dish with meat inside may seem to describe the “how” behind cellular agriculture, or the scientific basis of the concept, we sought to create a visual that would summarize the “why” behind the aforementioned strong descriptions that CellAg so often receives. In other words, we felt the cellular agriculture space needed a visual that was as dramatic as those impassioned characterizations that people so often award the concept.

When we originally launched in 2018, we wanted any user’s first impression of cellular agriculture and CAS to be powerful. We built our homepage, specifically our hero image (the first image, front and center on a website) around the visual portrayal of our slogan: For the People. For the Animals. For the World. 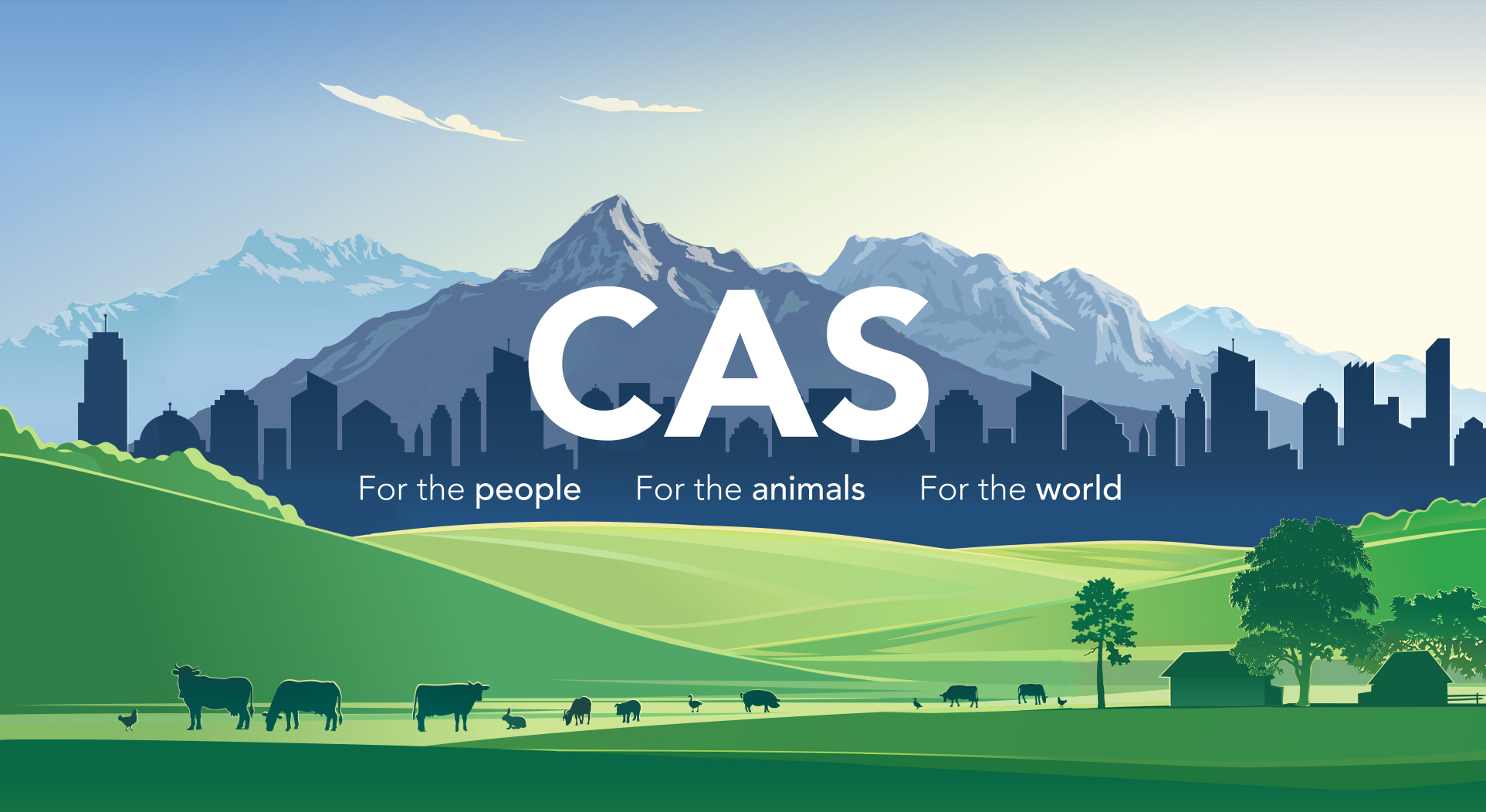 As we began to develop the CAS 2020 Relaunched Website, we sought to evolve this visualization to match how CAS was evolving. The goal was to create a looping, motion-based sequence that identified with our slogan just as our first hero image did, but taken to the next level. So, we created a visual that could tell the right story about cellular agriculture and our work at CAS for 2020 and onward; a visual that would inspire hope for those unfamiliar with the concept we represent, as well as give a sense of reassurance for those who are familiar with us already. And lastly, it needed to hint at what was ahead for us at CAS, transitioning our work into the creative domains of design and video. All of this translated into the making of CAS Vision.

A Vision for CAS & Cellular Agriculture

Our identity at CAS was going through a natural evolution after we first launched. As a young organization, our niche had yet to be found, but it became clear in 2019 that the creative angle we could bring to cellular agriculture was uniquely fitting to CAS. Our Founder, Kristopher Gasteratos, was motivated by his fellow leaders within cellular agriculture who didn’t grow up on farms or even necessarily have close ties to animal agriculture, but instead learned about a system that was in need of change through the internet and videos on platforms like YouTube.

Through discoveries like this amongst his peers, he slowly became keen to the special qualities of “video”. And having years of experience communicating cellular agriculture verbally, textually, and through still-imagery, Kristopher felt he could make a reasoned assessment on the matter. He ultimately felt that video as a communication platform for CellAg was generally superior to the rest; this perception shift carried through organizationally as CAS started to recognize the vast and unique capability for the medium of video to tell stories and share visions on the future of cellular agriculture that other media formats such as literature just couldn’t compare to. When it came to communicating the CAS viewpoint related to the core principles of cellular agriculture, Kristopher simply felt that the other media types fell short in contrast to video, especially for emotional evocation.

The integration of music within “video” was an additional characteristic that Kristopher felt could properly heighten CellAg. Through carefully sourced music, he felt CAS could create emotionally evocative experiences, allowing people to understand the potential of cellular agriculture in its truest, most profound form. It was the intention for the most important video projects at CAS to cohesively combine with carefully-crafted soundscapes in order to influence the world without the limitations of language, a mass appeal that is vital to our international mission. He thought cellular agriculture, as a new concept that so many are unaware of, was in need of superb communication and believed that design and video would best achieve that aim in the early 21st century. This all culminated in 2020, where the medium of video would become the nucleus of the entire organizational programming at CAS. CAS Vision would mark the beginning of that organizational evolution.

The design philosophy behind CAS Vision began as a reimagining of the original hero image from our first website. When we set out to redesign our site, we decided we also needed to change the visual introduction from a Hero Image to a Hero Video. This required a “moving” visual, both in a physical and emotional form, that would inspire the world with our vision for cellular agriculture’s revolutionary potential, while also hinting at our future focus on video as a communication medium. Indeed, CAS Vision represents all of that for us: a vision through cellular agriculture, where humanity, animals, and the planet can live more harmoniously than ever before. A week prior to the unveiling of CAS Vision we shared a short teaser on how our website, and hence CAS, was preparing to better serve cellular agriculture, creatively…

The inspirational, visual projects we develop, also known as our “visioning” projects, are a central focus for us at CAS. Due to the visual medium they occupy, we find our visioning projects have expanded reach and heightened intrigue amongst our audience. These efforts heighten intrigue for cellular agriculture and serve as a unique digital conduit for us to relay the fundamental concepts we represent within CellAg. CAS Vision is no exception, as it was intended to give a simple, yet profound glimpse into a future with cellular agriculture. It features two primary animal subjects in the foreground, cows derived from the hero image on our original website. And since photorealism was not the objective, we had artistic freedom to add an ‘other-worldly’ look to the sequence. The 3D cow models, for instance, nod to the creative cell design, both featured on our website and as the backbone to CAS Ethos. The primary digital tool used to refine CAS Vision within the art direction stage, as well as the website’s loopable sequence was Cinema 4D. This software and some of the model topology can be found below. 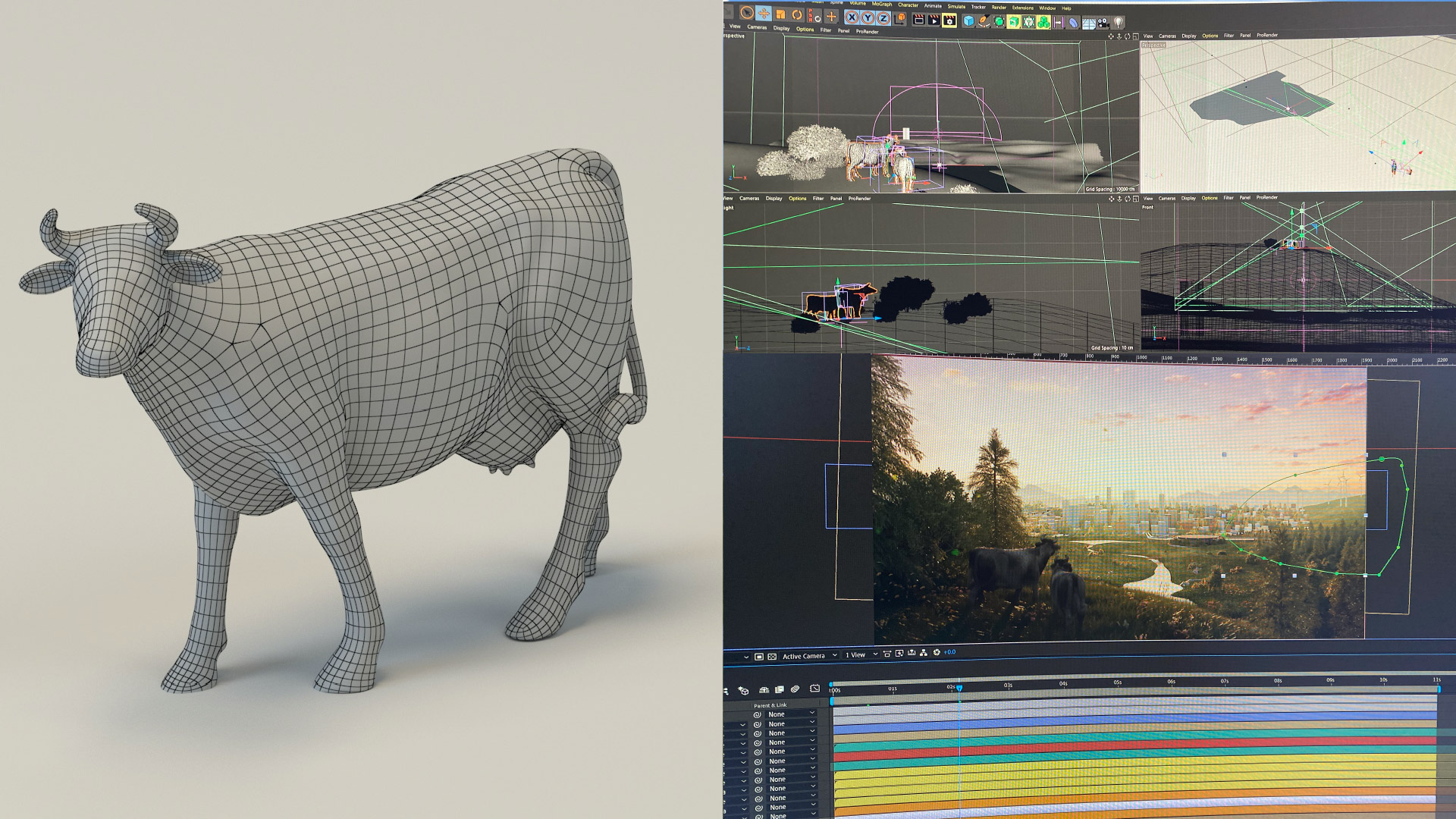 While incorporating the CAS Slogan, #PeopleAnimalsWorld, was salient, we held to our principles of purposefully omitting language out of the scene; we felt anything more than an instrumental musical piece would be unfitting since the prospects of cellular agriculture that the visual signifies are global in scale and not limited to any culture or region of the world. Instead, we sought to symbolize the slogan through the background city, Project CMF, a Hyperloop system (People), the cows (Animals), and the environment (World) encompassing it all. With regards to color, the project progressed towards a warmer, more sophisticated color palette over subsequent iterations. Ultimately the lighting and fog (symbolizing the commonly referred to home for CellAg, as well as CAS, San Francisco) influenced the color of the eventual final artwork as well. 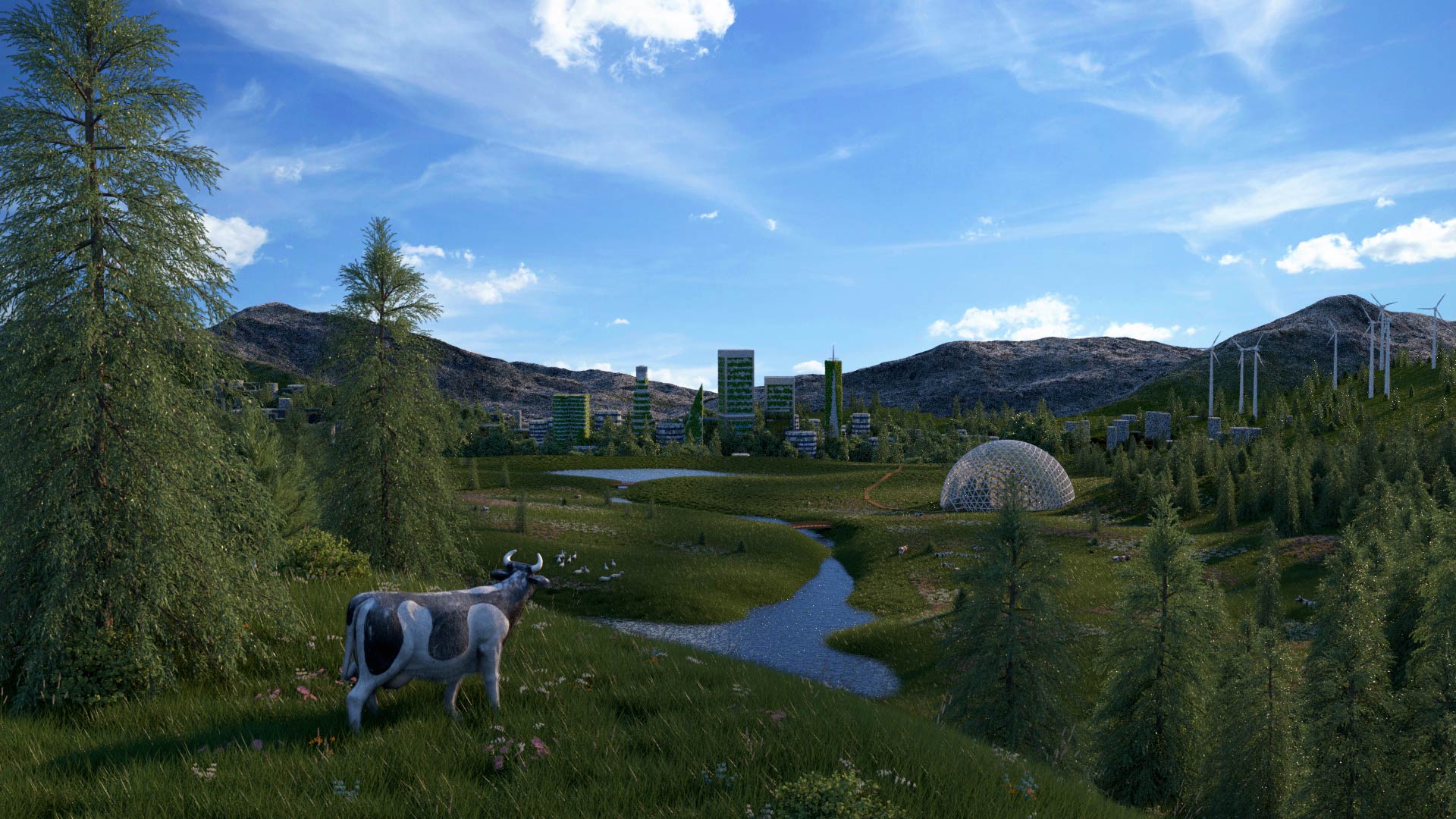 While our previous website's homepage stood as the most significant creative inspiration for CAS Vision, we would be remiss to not reflect on other pieces that lent certain creative elements to the final artwork. There were a multitude of key creative starting points within the film and video game industries, all of which converged as inspiration towards the final artistic achievement. 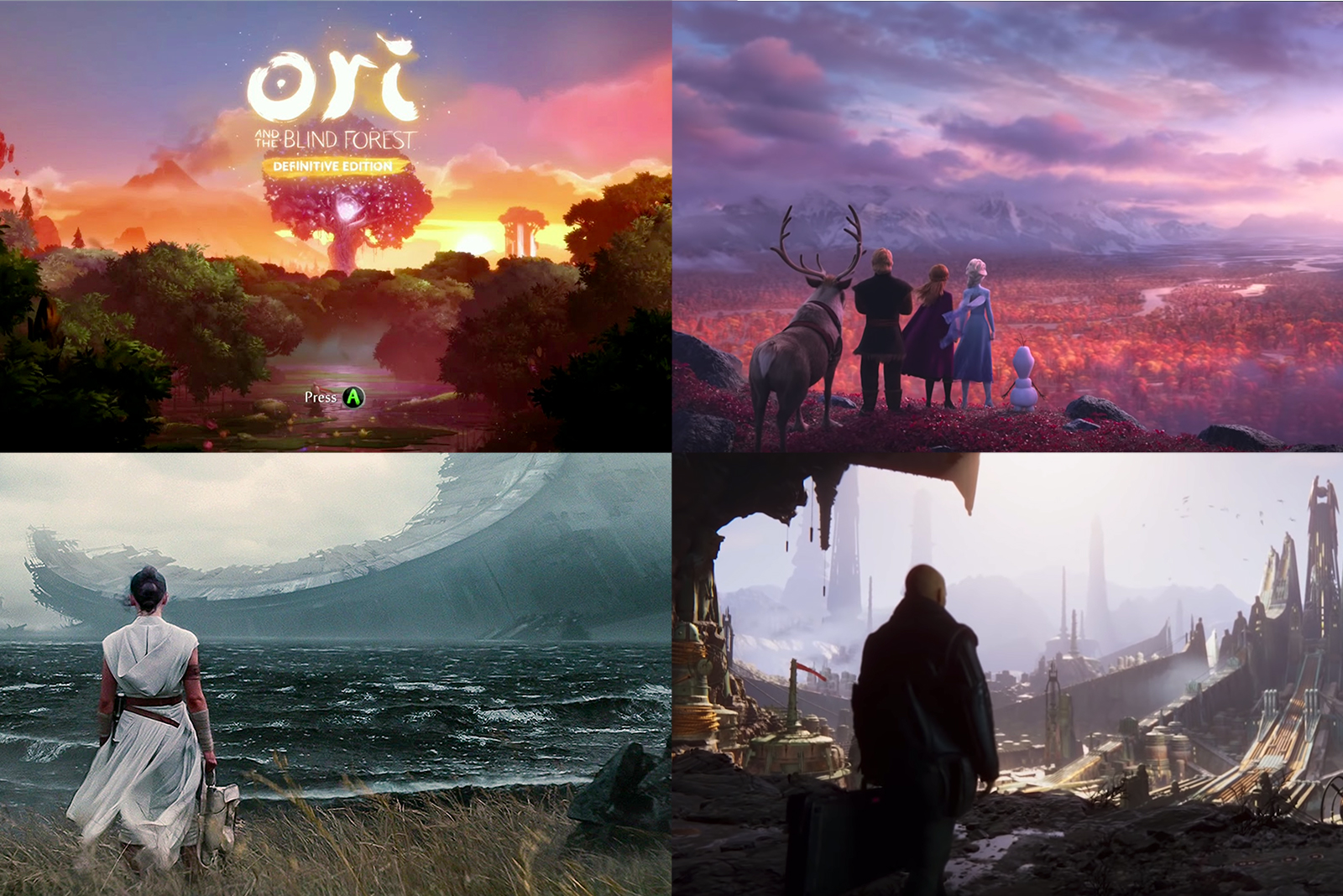 Ori & the Blind Forest (top left), was the first of these, specifically, the effect where leaves wistfully blow in the wind, as well as the natural color palette and serene mood conveyed in their Main Menu. A scene from Frozen 2 (top right) illustrates an outlook upon a grand landscape from higher ground which mimicked the positioning of our two primary cow subjects. Star Wars IX: The Rise of Skywalker (bottom left) features an epic scene with large environmental scale, atmospheric fog, and palpable solemnity which was also a creative spark for CAS Vision. And lastly, Unity’s real-time cinematic short film utilizing ray-tracing, The Heretic (bottom right), features a foreground character walking towards the horizon, positioned away from the camera’s perspective; what we aimed to reflectively achieve in our work was the effect of the backlit character, hiding a bit of the lost fidelity in the 3D models when optimizing the clip, a necessary visual tradeoff for displaying the artwork on our website. Lastly, it’s noteworthy that these 4 inspirations share an important sense of gravitas that pulls together the scene, audiovisually. And while varying in depth and degree, this is also an area we sought to incorporate into CAS Vision.

It goes without saying, that inspiration and ideation are nothing without capable individuals to drive them to fruition. We worked closely with award-winning teams, WOVE Collective and monopo, through a creative process spanning Q2 & Q3 2019 to create the unique visual that would ultimately define the CAS Website and our future direction in cellular agriculture. CAS Vision was concluded in the Fall of 2019 and is featured as the primary hero visual on our website, social media, and the CAStore.

CAS Vision, a Featured Design from the CAStore

We are proud to present CAS Vision below, paired with the musical piece, “Nascence”, by Austin Wintory. This short visualization, which also serves as our website’s opening sequence, depicts a future with cellular agriculture. It symbolizes the beginning of our journey at CAS using video as a communication medium for cellular agriculture education. CAS Vision further serves as an artistic encapsulation of our slogan at CAS: For the People. For the Animals. For the World.