Within the world of cellular agriculture, we have witnessed a divide between our field and the general population. Those deeply involved in CellAg have described the concept as so multi-faceted, that it is seemingly capable of endless possibilities, solving problems most would never link to the farming of animals. While those unfamiliar have viewed its potential as simple as making a hamburger without slaughtering a cow, not particularly revolutionary within domains like global health or environmental sustainability.

In an effort to unravel cellular agriculture’s diverse potential, we set out to compile a comprehensive list that could illustrate to the world how much impact CellAg could truly have. After years of development, this manifested into 90 Reasons to Consider Cellular Agriculture (“90 Reasons” for short), a publication that marked a historic collaboration between academic, industry, and nonprofit stakeholders in the cellular agriculture field. It outlined an extensive list of prospective benefits that cellular agriculture could offer upon its introduction on a global scale.

The Story Behind 90 Reasons

Since his entry into the field, CAS Founder, Kristopher Gasteratos, felt the concept of cellular agriculture offered such a breadth of possibility, but its appeal to the public was scattered and unapproachable. He envisioned an exhaustive document that was encyclopedic; it would gather all of cellular agriculture’s potential together in an easily digestible, visual manner.

In the early 2010’s, Kristopher set out to assemble a basis for this vision; he began to collect an extensive and varied set of benefits that would likely come about if cellular agriculture’s revolutionary potential became a reality. This compilation effort was fitting since he originally discovered his desire to become involved in cellular agriculture and start the Cellular Agriculture Society after being astounded by the potential of the concept to address major global problems: from offering advantages to personal and public health, to solving the most pressing environmental issues facing the world.

After years of building this cumulative list, 90 Reasons to Consider Cellular Agriculture was born, published on March 9th, 2019. 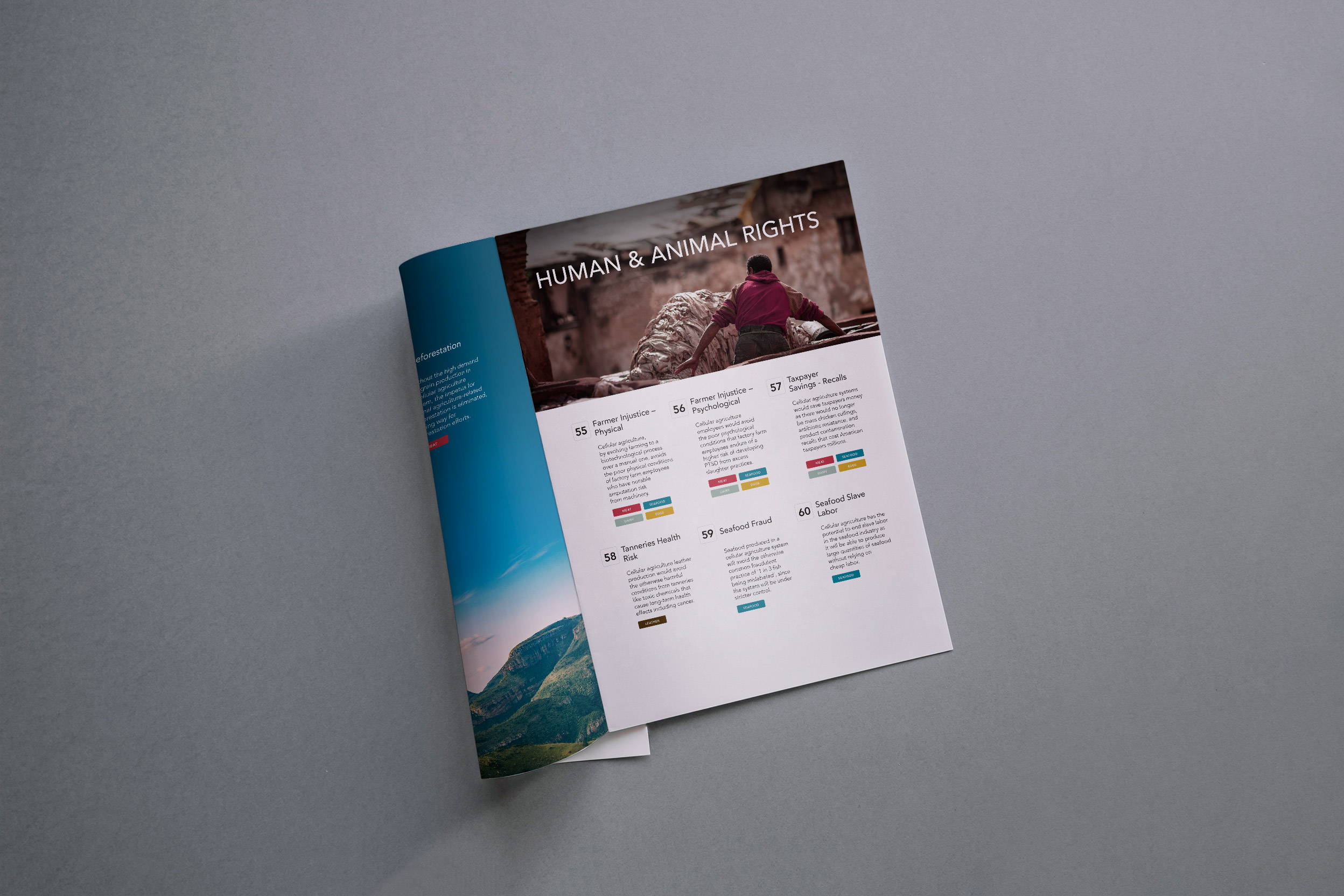 Creating 90 Reasons was never a solo job, however. Prior to publication, the entire cellular agriculture community came together to collectively brainstorm "reasons" and consider the long-term future that cellular agriculture could bring about. This collaboration with the CellAg community at large would ultimately formalize into the 90-point list, representing so much of the innovative philosophy behind both cellular agriculture, conceptually, as well as the trailblazers who helped start the global phenomenon that became CellAg. In later phases of its development, the list had 100+ “Reasons”, but the top 90 were selected to symbolize the “right” angle (90° geometry) that cellular agriculture could shift the world to if it holds up to its potential. Featured below are the individuals who helped with the development of 90 Reasons. 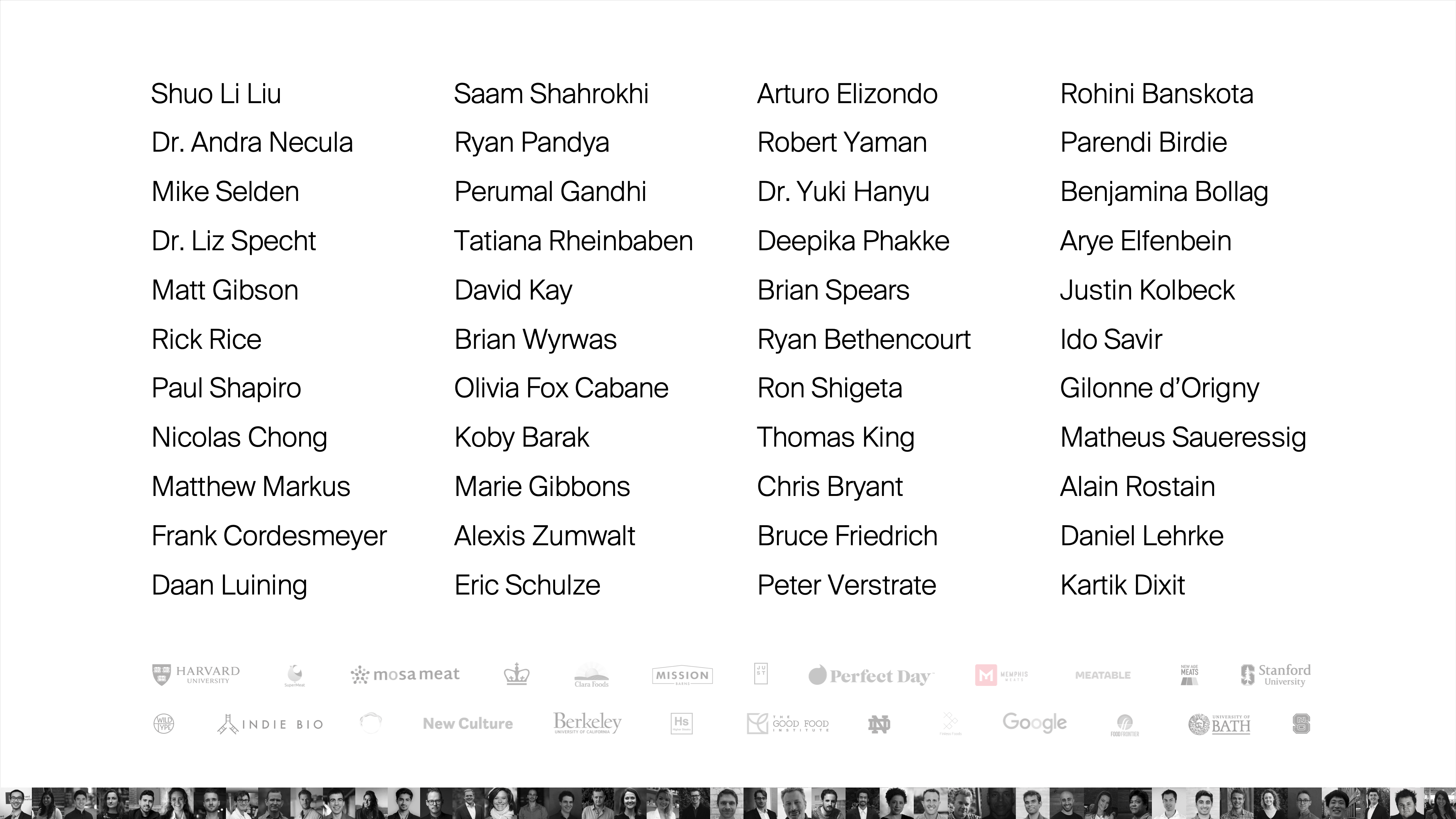 We think any healthy discussion about an emerging concept, especially one that could impact the world as dramatically as CellAg, should include detailing both the good and the bad. We believe considering only the “pros” is naive as there will always be “cons” as ramifications. Since 90 Reasons was intended to highlight the good, we find it both aligning with our responsibility outlined above and fitting for a balanced discussion to breakdown some of the potential drawbacks that are possible with cellular agriculture.

On our FAQ page, under the question, “What problems may cellular agriculture bring about?”, we outline some of these potential issues, and while this topic is certainly deserving of more than a few paragraphs, we attempt to elaborate below on some of the biggest challenges that cellular agriculture could present if implemented globally:

JOB LOSS - We find this to be the first, and most pertinent point when thinking about how the “good” stacks up to the “bad”. We approach this topic of job loss with a balance of empathy and reality. While we find it difficult to imagine a cellular agriculture revolution that does not impact conventional industries through job loss, it is something that our field does have the means to mitigate and an area we highly encourage our industry partners to stress as a priority.

It is our view that the potential for job loss is obvious with cellular agriculture’s future, but many people do not share this sentiment. We have encountered many antagonists who believe the world’s consumers will never be interested in future products made via cellular agriculture, and so a “revolution” in their eyes seems equally infallible. All that can be said to those parties who are disinterested in preparing for the potential agricultural revolution which CellAg could bring about, is that the opportunity is now to think about future directions. There are opportunities with companies themselves, as well as roles in the supply chain to produce raw materials that are needed for components in the production process like cellular media, for instance. With that said, many still hold the position that conventional animal farming is not under threat, but our warning remains that “the ship is sinking” and we are delighted to work with those members who are looking to grab a “life raft” early on. At the very least, we believe it’s important to open up a dialogue on what an animal agriculture to cellular agriculture transition could look like for the world this century, and how this could affect many generations of people integrated into the conventional farming industry.

ENVIRONMENTAL IMPACT INEFFICIENCIES - Cellular agriculture’s environmental impact is highly dependent upon the exact product being made, but early LCA (Life Cycle Analysis) research on meat produced via cellular agriculture has suggested a number of potential environmental issues. An Oxford study, summarized by the MIT Tech Review, suggested that meat made via cellular agriculture could have sustainability inefficiencies, even to the degree that its production could emit more greenhouse gas emissions via carbon dioxide than animal agriculture’s production emits methane; while the majority of greenhouse gas emissions from CellAg will likely be carbon dioxide, which has a weaker impact in the short term than methane, carbon dioxide has a greater, prolonged negative impact than methane related to environmental damage in the long term. Other research has suggested that the sustainability gains made through lower greenhouse gas emissions, less water consumption, and less land use could be negatively offset by the higher energy demands cell-based meat production could have.

PERFECT BIOMIMICRY - Based on the gradient of complexity, 1st-generation products made via cellular agriculture will not be the exact same as their conventionally-produced counterparts. In other words, producing a rotisserie chicken is not as much on the horizon as chicken nuggets or hamburger patties. This is not to say that multiple more decades of R&D within the field would be unable to lead to such expansion of product lines, but to claim that all animal products made via animal agriculture will have identical cellular agriculture-produced equivalents is misleading. Perfectly recreating any type of animal product with cellular agriculture is projected to be, at a minimum, many decades away. Major unknowns across various interconnected fields of science and technology, such as 3D printing and bioengineering, will need to be addressed to make such a dream a reality.

These topics touch the surface of potential negatives for cellular agriculture. We did not design 90 Reasons to create the false perception that a guaranteed solution to all of the world’s problems is just around the corner with CellAg. We believe a panacea touted as such will never live up to its potential, and based on probabilistic modeling, the negative potential that cellular agriculture holds at this early stage is just as bound to its future as its potential positive effects. The degree to which a concept can “solve problems” is contingent on many factors but based upon the evidence available, we believe that if a list could be built for potential negatives of cellular agriculture, it would not stack up to the 90 positives presented in 90 Reasons. This is the basis for our support of cellular agriculture, though we understand the benefits outlined are far from a guarantee since much greater work is needed to see legitimate commercialization of CellAg take place.

To conclude this section on drawbacks, the automobile, internet, and modern medicine are but a few examples of high-impact concepts that have changed the world. These innovations all came with their fair share of negatives. But as a result of their continued use in global society and constant troubleshooting over multiple iterations, striving for continued improvement, it seems their positive contributions have outweighed their negative ramifications. Whether that is for economic or social reasons is a non-sequitur; the people who voluntarily engage, as well as the governments which regulate the use of these powerful conceptual instruments, have decided they bring about more good than bad. If not, perhaps these concepts would have been abandoned long ago.

The relevance this has to cellular agriculture, is we hope to not find ourselves in a debate on whether the concept should be discarded because it is not perfect to every degree. As our Founder has claimed, if even just half of 90 Reasons becomes true, cellular agriculture will offer an astounding amount of potential to solve enormous problems across the planet. So, to summarize this insight on cellular agriculture’s future, we believe there are drawbacks that will unfold in the coming years and decades, but at this point, we find there to be more positive potential than negative. This, of course, is only based upon the available evidence at this point and is subject to the ever-evolving world of CellAg we find ourselves in.

CAS does not exist to make cellular agriculture seem great; we exist because both the available research and an objective, rationally critical approach to projecting CellAg’s future suggests a rather positive outlook. Ultimately, our support is limited to that future for cellular agriculture coming to fruition through the success of producers and major stakeholders alike. We believe, in large part, the fate of a world-changing concept rests in the hands of these producers, a primary reason for the establishment of our division of CAS Industry Partners.

Lastly, we would like to note that our distinction in remaining objective and critical of our field is exemplified in our funding/leadership, which has always been completely independent from producers and for-profit cellular agriculture companies. This is a fundamental value of our organization that allows us to remain dedicatedly responsible to the public, voicing critiques of our industry partners and peers in the field alike. While we respect these entities, we also have a unique internal viewpoint within the CellAg space, and we believe the public deserves proper insight into that; we have and will continue to call out what we see as bad, consumer-unfriendly practices if they arise.

Shortly after its publication, 90 Reasons began to garner the attention of world-famous academics like Steven Pinker and Peter Singer. These CAS Advisors, among other influencers, helped increase international awareness of cellular agriculture's world-changing potential. 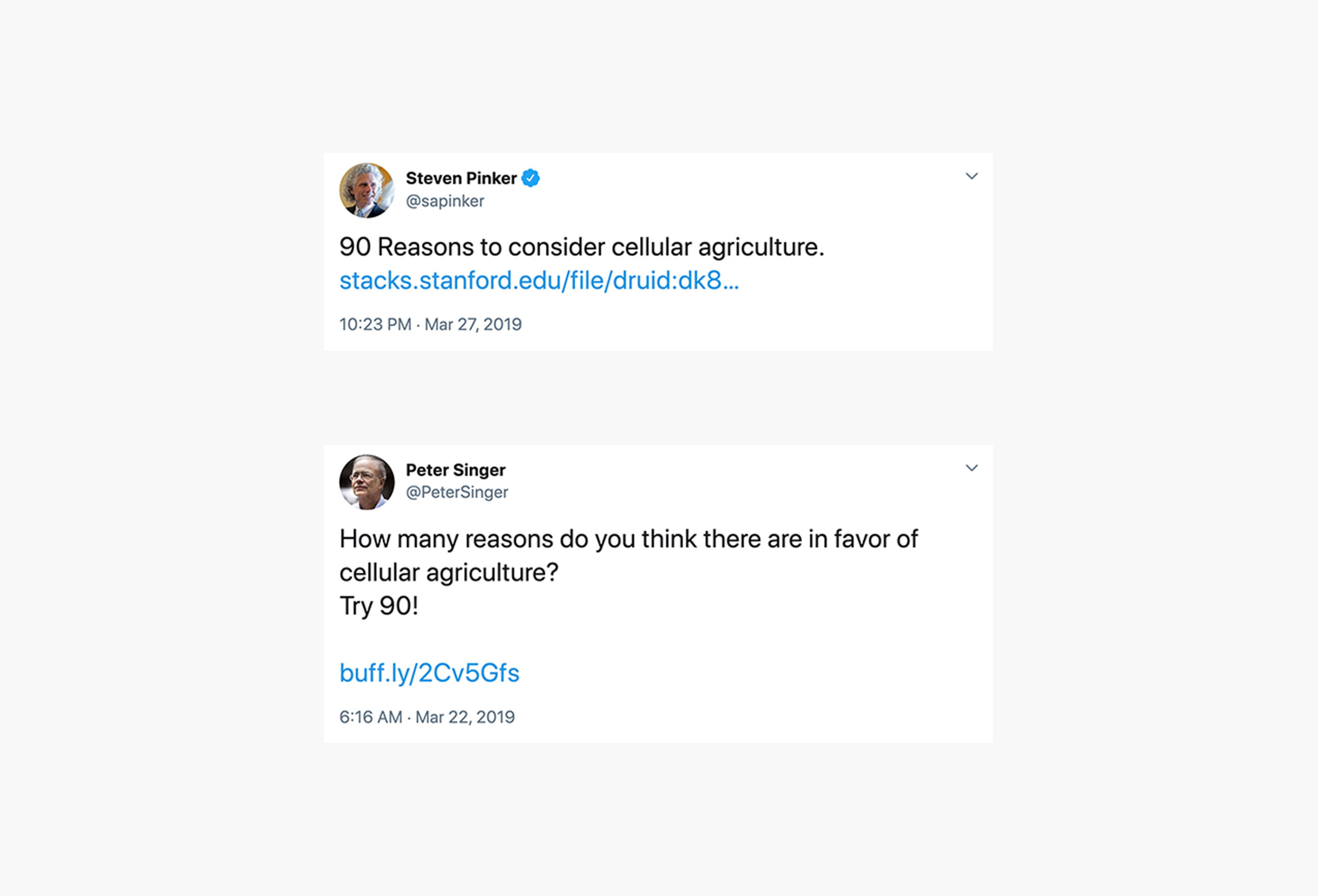 Just a few months after its release, 90 Reasons reached over 10,000 downloads (excluding Stanford downloads/views), thanks in large part to these influencers and cellular agriculture stakeholders. We are grateful to both Harvard & Stanford for hosting 90 Reasons as a digital literature; their support will help the work reach greater readership milestones for years to come. You can learn more about our collaboration with Harvard, and how it spurred the development of 90 Reasons here. 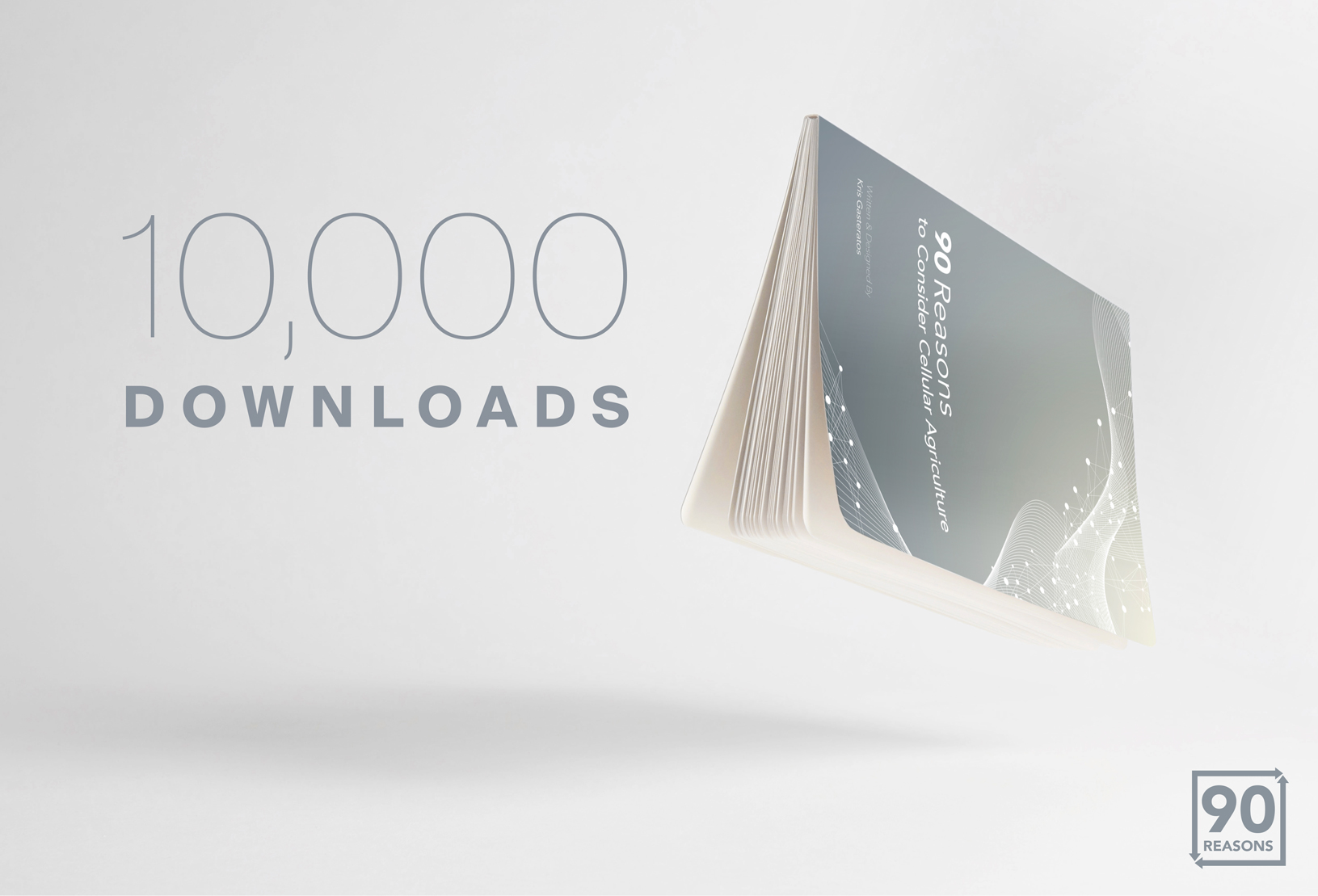 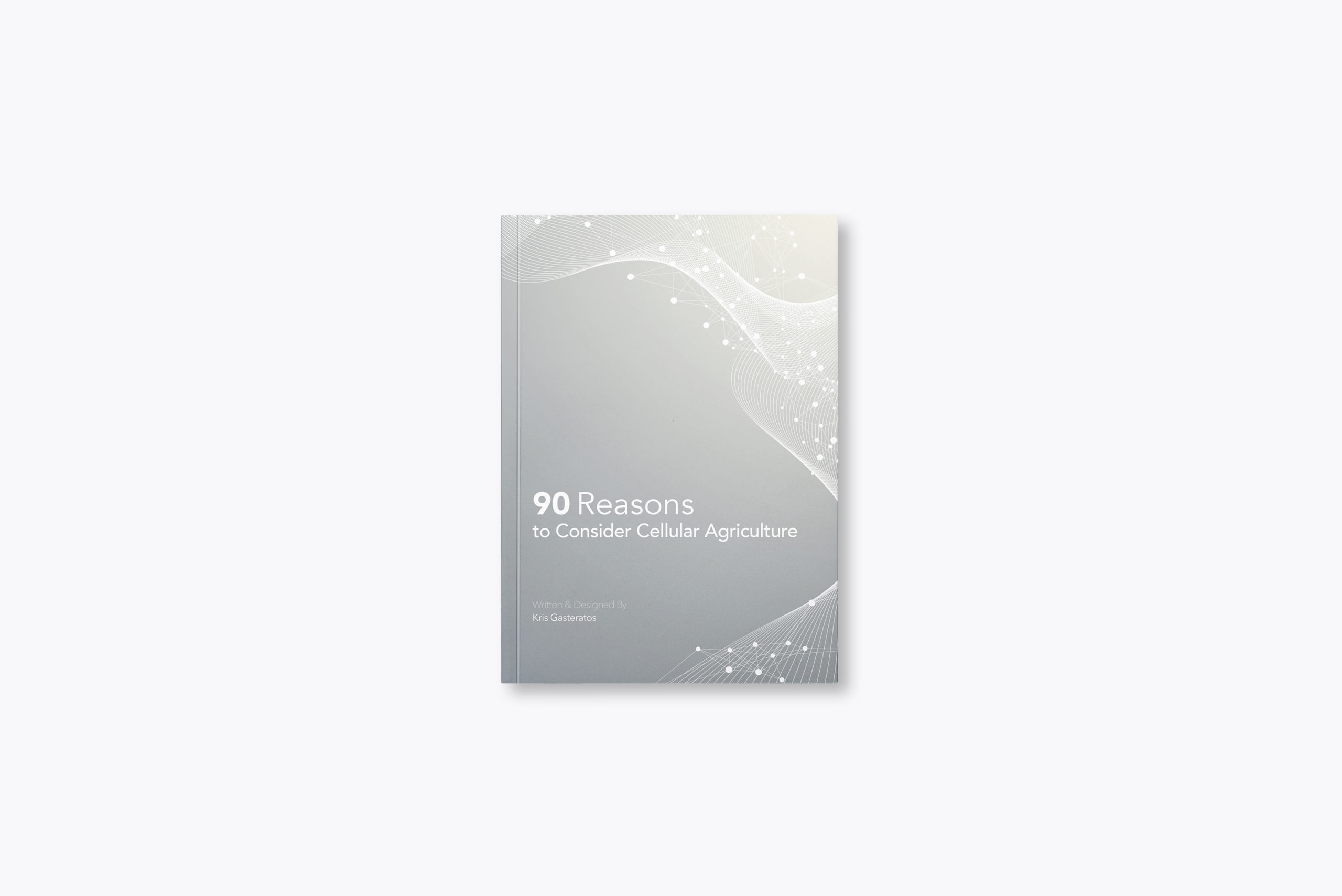